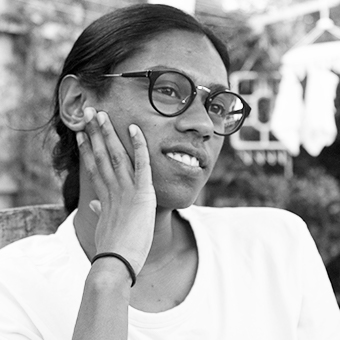 Born in Melbourne. Lives and works in Sydney.

Akil is a multidisciplinary artist whose work draws upon his own online experiences to consider the physical and social isolation that often governs the shaping of identity in a contemporary context.

Exploring the forms and techniques evident in autonomous sensory meridian response (ASMR) roleplay videos, Akil employs installation elements and audio technology as the interface between himself and the audience in the gallery. The forced virtual intimacy that is created in this space becomes a gently disarming platform for Akil to discuss the formation of his own identity through various media including literature, films, advertising and fashion. Reading seemingly disparate sources, such as historical anti-colonial literature, through sneaker advertising, Akil attempts to trace an ongoing legacy of insurgency and emancipation that is ultimately subsumed within the logic of competition that underpins contemporary neoliberal capitalism. In drawing this line of thought, he brings into question the capacity for individual agency within the many liberties afforded by consumer culture.