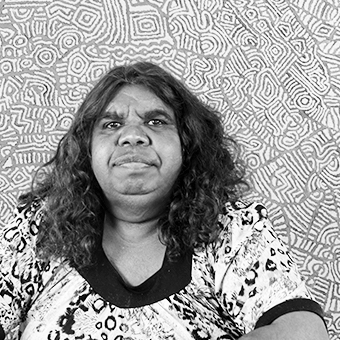 Born in Papunya, Northern Territory. Lives and works in Papunya.

Beyula Puntungka Napanangka has been a dedicated member of Papunya Tjupi Arts Aboriginal Corporation since the company’s inception in 2007. She is the daughter of pioneer Papunya Tula painter Limpi Tjapangati, whom she observed painting as a young girl. She later practiced for herself on cardboard. From her father Limpi, Beyula inherited rights to the country near the Murini Range which Beyula often depicted in her early paintings. She also inherited a bushfire story Kali Karringpa from her grandmother and, from her mother, the rights to a dingo dreaming site at Nyumanu near Kintore. But it is her own dramatic version of the honey grevillea dreaming story inherited from her grandfather to which Beyula dedicates her work. Kalinykalinypa, or desert grevillea flower, is a bush delicacy for Aboriginal people. Kalinykalinypa grows in the sandy soils on the plains. The beautiful orange coloured flowers are picked early in the morning and placed in a billycan of water to create ‘honeywater’ (cordial), or sucked straight off the branch for their sweet honey dew. Anangu move from flower to flower bending it to them so they can suck the nectar, rather than picking it.

The strength of Beyula’s work lies in the abstracted organic under-drawings that create intricate and immersive spaces that the viewer is immediately drawn into.

Beyula is a key painter at Papunya Tjupi. She paints in the Papunya Tjupi studio alongside her husband and traditional owner of Papunya, Bob Dixon Tjupurrula.