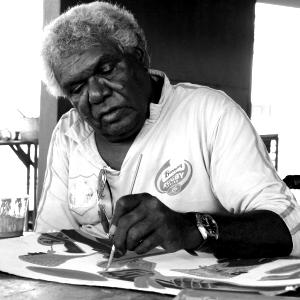 Ben Ward was born on Argyle Station where his half-Mirriwoong, half-Afghan father worked as a stockman. He is a senior cultural custodian of the Miriwoong people. Ben was recently named as one of three Indigenous finalists, and at 65, the oldest emerging artist in the John Fries Award 2015.

After a working life as a mechanic and stockman mustering cattle in the east Kimberley, Mr Ward became strongly involved in land rights and in the 1980s helped set up Kununurra’s Waringarri Aboriginal Arts in Western Australia. Over the course of his life, he’s been a health worker, a field officer, a station hand and in community education.

Between 2011 and 2014, Ben was Chairperson of Waringarri Aboriginal Arts. It was not until 2011 that he began painting regularly.