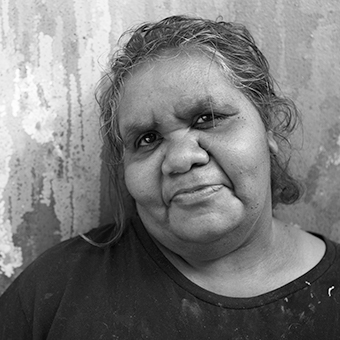 Rachael is a rising star of the Ernabella Arts’ painting studio. She paints the messages and stories she receives through her dreams.

Rachael is the third of four generations of Lionel women to work at Ernabella Arts in the Pukatja Community. She began painting at the art centre on and off from 2006, committing to her practice more fully from late 2015. She was a finalist in the 2016 National Aboriginal and Torres Strait Islander Art Awards. Her award entry Kapi Wankanya was acquired by the Museum and Art Gallery of the Northern Territory.

Rachael’s paintings have been exhibited internationally at Aboriginal Signature in Brussels and Harvey Arts, USA. She’s also exhibited in various Australian galleries including Outstation Gallery in Darwin; Short Street Gallery, Broome; Alcaston, Melbourne and in a recent family exhibition at Tunbridge Gallery, Margaret River, featuring three generations of Lionel women. She has four children, one of whom is emerging ceramic artist, Vennita Lionel.